The port of Palermo is located a few minutes from the historic center, so the proposed walking tour will be easy to do in a few hours to discover the thousand colors, multi-ethnicity and the millennial history of Palermo.

TOUR :
The route starts directly from the port and we will head towards via Emerico Amari until you reach piazza Castelnuovo where you will admire the first of the city theaters the Politeama Theater. Shortly thereafter we will meet the second city theater: the Vittorio Emanuele Massimo theater. Famous because it is the largest opera house in Italy and the third in Europe. The visit follows the lively Via Maqueda up to the Quattro Canti called the theater of the Sun with its Baroque decorations. The visit of one of the most representative monuments of the city follows the Pretoria Fountain better known as the Fountain of Shame. And still the Palazzo Pretorio seat of the municipality of Palermo with the statue of the Genius of Palermo which is one of the symbols of the city. In front of the fountain we find the church of San Giuseppe dei Teatini with the Miraculous source of the Madonna della Misericordia. We will head to Piazza Bellini where we will visit the Arab-Norman church of Santa Maria dell’Ammiraglio known as la Martorana. The monument is famous because here the nuns of the Martorana monastery invented the Martorana fruit. The church known for both Byzantine mosaics and Borremans frescoes. Next to Martorna we find the church of San Cataldo with its famous red domes symbol of Palermo. We will conclude the walking tour going up the ancient Arab road of the Cassaro today called Corso Vittorio Emanuele. We will reach the Norman Cathedral. The church is an ecclesia with a fortified church with its towers and mosque decorations. Inside there is the chapel of Santa Rosalia and the chapels of the Norman kings and of the Stupor mundi Federico Secondo. Before concluding, we will visit the Capo market one of the 3 historical markets of the city. Traveling along the Artale climb, famous for its exposed Sicilian carts, you reach the Capo. The market with its colors and smells projects us into an atmosphere of the Arab souks. We will reach the Carini gate a few minutes from the Massimo theater where the tour ends. 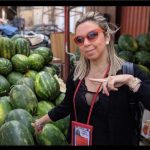 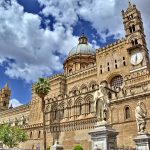