The Royal Palace called Palazzo dei Normanni, seat of the oldest Parliament in Europe, with the splendid Palatine Chapel inside have been part of the Unesco monuments since 2015.

The proposed tour will lead you to the discovery of one of the most important monuments of Arab-Norman Palermo, an expression of the happy coexistence in the Middle Ages between different ethnic groups: Arabs, Normans and Byzantines. The Palazzo dei Normanni is a fundamental place for the city and history of Sicily. Here we find the seat of the ancient Sicilian Parliament still in use. The palace was the seat of the Sicilian poetic school at the time of Federico Secondo and residence of many Spanish Viceroys. Inside we will admire the decorations of Ruggero’s room, of the Chinese room and Pompeiana. Finally, a visit to the precious Arab and Byzantine decorations of the Palatine Chapel with the world-famous Christ Pantocrator.

Nb: on days when the Norman palace is not entirely open to visitors but only the Palatine chapel can be visited, the view of the palace is replaced by the cathedral of Palermo. 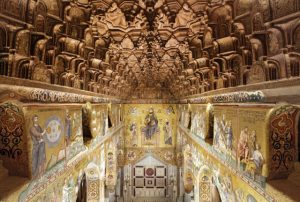 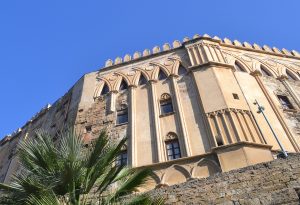