The Zisa Castle is one of Palermo’s Arab-Norman masterpieces, a World Heritage Site since 2015.

The history of the Zisa begins in a little Norman with King William I. Around the city of Palermo stood the park called “Genoardo” that is Paradise of the earth. Within the park, the Altavillas promoted the construction of their “Sollazzi Regi” (places of delight), splendid residences for recreation and rest surrounded by magnificent gardens with lush vegetation, hunting pavilions, artificial lakes and fish ponds. Between 1165 and 1180 the most significant expression of this type of building, “the Zisa”, so called from the Arab term “El-Aziz” that is the “Splendida”, was completed by Muslim workers.
The imposing mansion, an authentic jewel of Islamic architecture, was built by the will of William I known as “il Malo”, who, ambitiously influenced by the charm of royalty, wanted a palace that surpassed those built by his father in terms of comfort and artistic perfection. Roger II “.. began to build, near Palermo, a palace of great height, worked with admirable artifice …”. The work was completed by his son William II, as evidenced by the inscription in “nàskhi” characters in the entrance arch of the Sala della Fontana in which the building is exalted and the one who completed it, called by the nickname ” Musta’izz ”(eager for glory), which the latter sovereign was proud of.

Bus: from Palermo Central Station line 101 to Piazza Politeama, from there continue with line 106 to Piazza Principe di Camporeale

Car: from Palermo Central Station, go to Piazza Indipendenza, continue in the direction of via Dante, go straight on and reach Piazza Principe di Camporeale, from there take via dei Normanni to your destination. 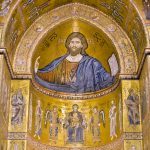